Jan272017 by lauraNo Comments
Costumes For Me 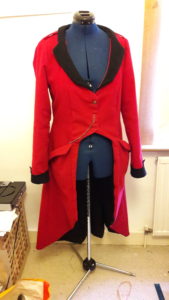 I made this coat for a mixed ability dress making class I attended in 2013. It was made from Simplicity pattern 2172, the last pattern I ever bought. I have worn it ever since, admittedly it doesn’t give great protection from the rain but I love it.

I was surprised to get so many people on the street come up to me and tell me they like it, I really need to get business cards.

By far the greatest compliment I have ever received was for this coat. It was from my brother in law, who on hearing I had made it myself said “but that’s a…     real coat”…so proud.

It is made out of red Melton and is fully lined. 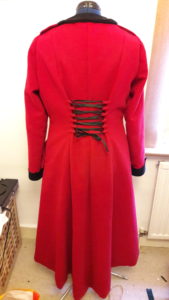 One thing I have learned from this coat is that I must use thicker thread when attaching buttons, especially over my bust.

Jan192017 by lauraNo Comments
Costumes For Me, Hawkgirl

I have chosen Hawkgirl as my costume, she was always my favourite in the animated Justice League, after Batman of course, and the wings should supply me with a suitable challenge. The real question is who will my husband be. Ideally he would be John Stewart, but alas making him look less like Hal Jordan would be a hate crime. So I guess Hawkman would be the better choice, though it means making the same costume twice…hmm…something to think about.

Anyway, I started making her a few months ago, I started by playing with the wings, if I couldn’t get them to work I would rather know sooner than later as they are fairly integral. 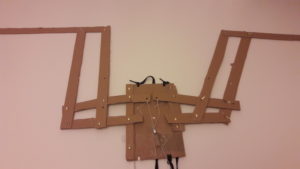 So far so good. I have the basic structure and opening mechanism down. Open they are about the same size as my craft room so working on them is a bit fiddly. I have to decide what to cover them with. Hawkgirls cannon is somewhat all over the place. Some versions have actual wings with feathers but most wear a harness made of nth metal with either nth metal wings or feathery wings. it would be too expensive to use real feathers and I would feel a little bad about using that many feathers despite being a carnivore.

At the moment after much deliberation I am considering using gold pleather, it can be shaped and painted, should be easy to apply and can look both feathery and nth metal-y. It will take a lot of time to make them all but I am a glutton for punishment. My only real concern is that they will be one sided, so either the other side will have to be dealt with or I have to make twice as many which is added time and weight. Regardless I am not allowed to buy any more materials until I have completed some of the other parts she requires, so this question can mull while I work on the bodice.